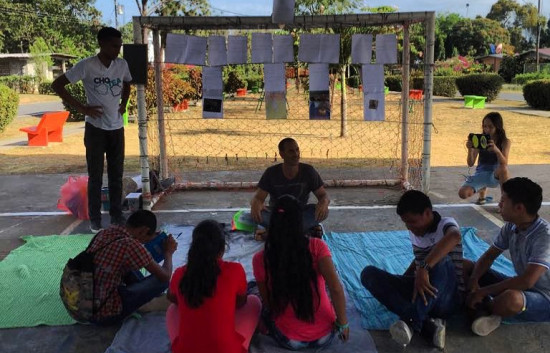 I learned about travel abroad experiences through my older sister's childhood friend Julie who went to Russia for a year. She was not quite the same when she came back, but her self-confidence encouraged me to take the plunge. My French-speaking friends and family have often asked me why I chose to spend a year in Australia since I could already defend myself in English? Why not learn another language all together? The fact is that the language is only one aspect of doing a cultural exchange. I had always been puzzled by Australia with it's weird animals and it's end of the world remoteness. I had never met an Australian, neither had I ever seen anything "Made In Australia". For me it represented the ultimate frontier. To my surprise, once I got there I could not understand their English, or not much, but I remembered what the AFS volunteers had told me. They told me to SMILE a lot because it's an international language. It got me through the start of my year. A few months later I had somewhat mastered the language, but in some respect I did not always understand the "Aussies". The cultural differences were kicking in: the sense of humour, the traditions and etiquette, the social values plus all the particularities of my new adoptive family and school. This was the hard part, the part that is not taught in books or at any school. I had to find new bearings through my own trial and error. It was like riding a roller-coaster of frustrations, successes, misunderstandings, laughter, surprises, homesickness, discoveries, and human connections. The AFS adage was the only and the most accurate advice which I had to remember and apply all the time: "Not good, not bad, just different!" This one got me through the rest of the year. My host family were volunteers and they opened their home and their hearts to me. I owe them more than I could ever pay back. By the end of my year I was proud to have adapted to my new home. I knew I would never become a 100% "Aussie", I knew I would always carry a bit of Australia in me, and I knew that, as Julie, I would not go home quite the same as when I left. It's only through experiencing all these differences and getting out of my comfort zone that I was able to recognize that humans are way more alike than they are different.

The experience of my year abroad taught me that connecting one on one with people from other cultures is the key to peace on earth. There is no way I could ever stand anything happening to my New-Zealand, Thai, German, Japanese, Swedish, Argentinian, and Australian friends I made overseas.

Since my return in 1995 I have been fascinated by intercultural exchanges and it's effectiveness at opening the minds of youths. I have hosted 3 intensive international exchange programs in Canada, launched a vibrant backpackers' hostal in Nicaragua, and traveled many countries especially in Latin-America.

Not sure where to go from here?